So Mom can’t remember bananas, the cat’s dead, mom’s pissed, and the papers are signed.

The date had been set. I live in NYC so now I was able to fly in for the actual moving date. The family decided it best not to move out of her home completely while she was there to watch it all disappear around her. We did have to prepare, clear out closets, get rid of the old unwanted crap that had been hiding for years. Throw out the litter box. Awful. It was hard enough….

“What’s that? What are you taking? That’s mine!” She’s claiming the 10th in a long line of aged ashtrays. Come on. But to be fair there were books and knick-knacks that she loved and we had to be sure not to go too fast. Although she was a bit of a “keeper” let’s call it (that’s my Southernese for Pack Rat.) And some stuff just had to get the boot without the Boot Makers permission. I mean we aren’t going to ask if it’s ok to get rid of the lamp from Target that’s been stationed in the back bedroom you haven’t entered since 2010.

None-the-less, the actual release of the apartment had to happen after she’d left for the new home. We had to be out of the apartment the same weekend we moved Mom for various reasons. But if you’ve ever moved you know it’s a stress ball. Now add moving your mother into a home for the elderly at the same time. Then add her freaking out about everything from that moment on. It was swell!

But after the experience we’d had in the first week of her living in the new facility we knew we made the correct and timely decision. Change is Alzheimer’s greatest foe.

I flew in on Friday, the day she moved in, but I didn’t get to see her until Saturday morning. There had been a “plan” (what’s that?) to go down and help with the move, (an hour drive), but I ended up staying with Mom all day. And that is where I started to see the miracles land in place.

At first I had a sort of reactionary impulse because I’m not around day to day. I’m still catching up with the reality of where her brain is not. And it took me about an hour to begin to respond differently to this new person in front of me. A person who looks 86 but is acting about 4; a 4 year old who smokes and bitches about commercials and old people. But as the day went on I was given a crash course in… well… Motherhood. A holding of the hand. My arm around her shoulder, it seemed, constantly. Reassurance after reassurance after reassurance. Loving patience. Where the HELL did that come from? Oh. Right. Love.

We did go out to lunch with my niece and her kids. I had to give them a copy of my driver’s license to take Mom off the premises. I had to learn a numbered code to unlock the front door from the inside and from the outside.

Mom was shaking. Upset. Forgetful in too many ways to count.

Everyone seemed to suddenly start adulting anew in my family in monumental ways. There’s a hard right of passage of which no one warns. The day you become the Parent Generation. The day you become the Mom, Dad, Aunt, Uncle that you revered and minded your entire young life. And then you are asked to take the helm. Or you just one day find yourself helming and you wonder when did that even happen. How did we get here….

On the way to lunch a woman stops us. Mom is in the front seat. We roll down the window. She starts asking questions about the facility. Starts talking about her mother and how her mother has Dementia. Just obliviously blabbing away. And then she says clear as a bell – in front of my mother as if she isn’t even there – “Does your mother have Dementia?” Mom heard it, of course, but was slow on the uptake and started saying “What? What?” I gave this woman what I thought was the ultimate universal STOP TALKING look but there must have been something lost in translation.

“DO I HAVE DEMENTIA?!” Mom roared.

My mom knows what that is. Her mother had it. Not good. My niece, in the driver’s seat, was caught between the two. I just said from the back “We can’t talk about this right now.” [WINK-WINK-UNIVERSAL-SHUT-THE-HELL-UP-YOU-ARE-UPSETTING-OUR-SOUTHERN-MATRIARCH-AND-WE-STILL-DON’T-DO-THAT!!!]

Finally, as my mom repeated her hard earned question the woman abruptly, having processed the edict, said goodbye.

A friend of mine gave me a piece of advice from his own experience. “Now is the time for the white lie.” Don’t feel guilty. It’s better to keep a situation calm than to feed your pride, prove your rightness or to tarry down a road that will only bring doom and gloom sans breadcrumbs to find your way home.

So as the stranger left us in her wake of insensitivity out came our first white lie:

“Mom, she was just talking about her mother. Her mother has Dementia.”

“Oh. Ok.” And it was as if it never happened. We were safe. My niece hit the gas. I shrank into the safety of the back seat.

It’s all hard enough without the friendly fire, folks. The elderly are you in the future. Just older. We met new people. We met Miss Amy, (in the south everyone is Miss or Mr. First Name), the Chaplain. “She just wants to sell me church.” My eyes roll and I point out how Miss Amy never mentioned God and never invited her to her church. Which mom will never go to because, in the first place, she’ll never know the code to get out the front door. This is the truth, Folks.

We met Miss Latrelle. Ohhhh Mom liked her. And there was good reason. This lovely round woman with her doctor’s bag walked in on a cloud; her feet firmly routed in the earth. You meet people sometimes in the field of nursing and you just know that it is a calling for them. Not a J-O-B. With every move and breath I felt that World Peace just might be possible. If Miss Latrelle was in charge. She remarked on Mom’s beauty (she is beautiful), her piercing blue eyes and how she needs to take her to a bar so she can help her get a husband. Mom was utterly charmed and so was I. And not an ounce of it was phony.

Miss Latrelle ever so gently took Mom’s blood pressure, checked her heartbeat and then came the conversational “questioning.”

“Can you tell me your Birthday, Miss Ann?” “Oh, well it was not too long ago…” Mom looks at me. I smile and shrug. I can’t help her cheat. “I know I just had it.” I confirmed this was true. Once it was clear she didn’t know, I told her. July 8th. “Can you tell me who the president is?” “Who?” “Yes, Ma’am.” “Oh well… I knew that. I don’t really keep up on those things…” She’s hedging. If there’s one thing that everyone knows right now. It’s who the president is. But that was all. She couldn’t answer. No more questions. The defense rests.

Miss Latrelle floated out but not before turning fully back around and walking back to Mom in close “you matter” distance. It was Mom now who was doing the asking. “When are you coming back?” She’d be back on Tuesday. I exhaled. A friend. Miss Latrelle is one of the Chosen. Miracle #1 had happened.

We sat on the porch in the quiet watching the fountain on the front lawn. Mom spoke of her fears. So very many. But mainly the channels, the commercials and the “Old People.” I listened and talked about those “Old People” needing her compassion. She allowed as how I was “probably right.”
By about 8pm the other sibs rolled in sweaty and tired from the second to last day of the move. We helped Mom get into her night clothes. She got ruffled again with the entrance of the rest of the family. She had now forgotten how to use her cell phone. “You just hit the speed dial.” “How do I do that?” “Just open the phone.”

Another new low. But the good news is that a couple of days later after the initial fear and change had worn off, she remembered quite readily how dial us. Every one of us. Once a Matriarch. Always a Matriarch.

It had been a long hard day for us all. We got Mom settled for the night and all planned to crash at my brothers home 10 minutes away. Around the kitchen table we sat, void, taking it all in. Silence.

And then… a text.

It’s our cousin. Mom’s nephew. His mother, our mother’s only sister and our aunt, has just gone into the hospital unexpectedly.

They don’t expect her to make it through the night.

4 thoughts on “Yes, We Have No Bananas… Mom, Alzheimer’s & Miracles Emerging (Part 3)” 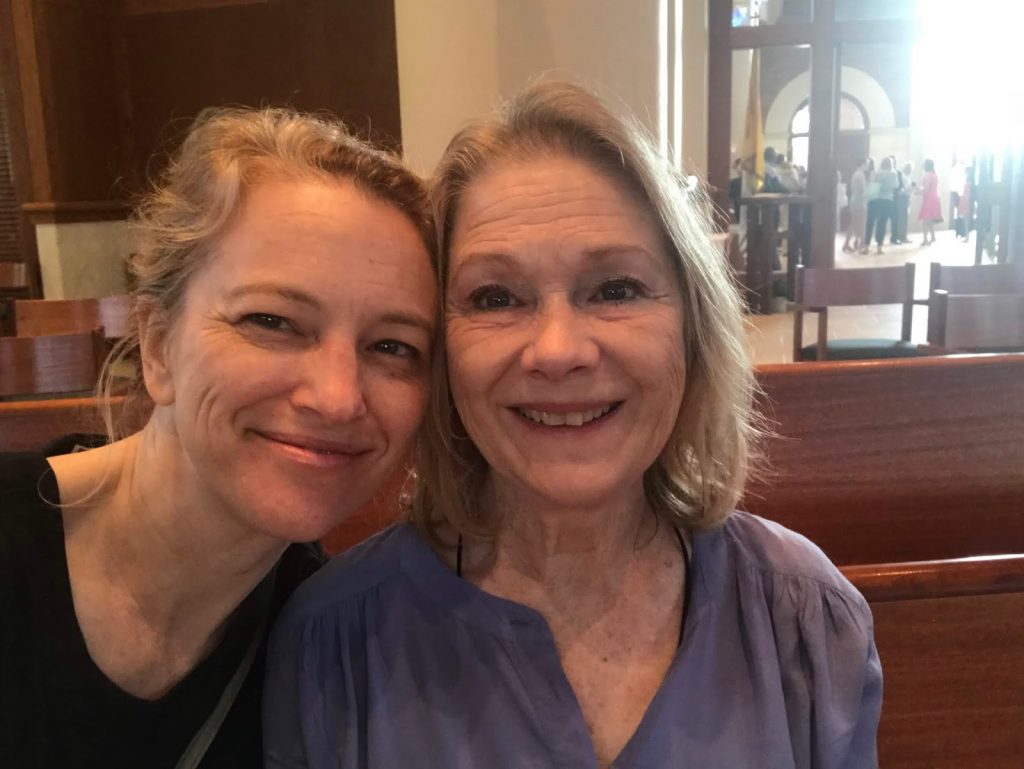